I have always been fascinated by surrealism and Salvador Dali in particular. When i look at his art it always makes me think about human subconsciousness and psychology.

One of my friends has a copy of Salvador Dali sketch “City of drawers” (1936), and i just fell in love with it!

“City of drawers” makes use of the psychoanalytical reference of Austrian psychologist Sigmund Freud; “City of drawers” like “The Burning Giraffe” has sets of drawers, which fits in with Dali’s quote: “the only difference between the immortal Greece and contemporary times is Sigmund Freud, who discovered that the human body, purely platonic at the Greece epoch, nowadays, is full of secret drawers that only psychoanalysis is capable of opening.”

I found an interesting site that talks about art, here is the link for people that might find it interesting:

[“The Secret Drawers of the Unconscious

The drawers that open out of Dali’s human and other figures have become as universally familiar as his soft watches. The Venus de Milo with Drawers or The Anthropomorphic Cabinet have imprinted indelibly Dahnian images on the visual memories of millions. Before painting the latter, Dali did a number of detailed preparatory pencil and ink drawings. The painting was conceived as a homage to the psychoanalytic theories of Freud, whom Dali (unsurprisingly) revered. Dali viewed his own subject matter as an allegorical means of tracing the countless narcissistic fragrances that waft up from every one of our drawers (as he put it). And he declared that the sole difference between immortal Greece and the present day was Sigmund Freud, who had discovered that the human body, purely neo-Platonic at the time of the Greeks, was now full of secret drawers which only psychoanalysis could pull open. Dali was familiar with the furniture figures made by the 17th century Italian Mannerist Giovanni Battista Bracelli, and they doubtless influenced his own figures with drawers. For Bracelli, though, furniture figures were a game played with geometry and space, sheer jeu d’esprit, while for Dali, three centuries later, a similar approach expressed the central, obsessive urge to understand human identity.”]

[Ant Face. Drawing for the Catalogue Jacket of Dali’s Exhibition at the Alex Reid and Lefevre Gallery in London 1936] 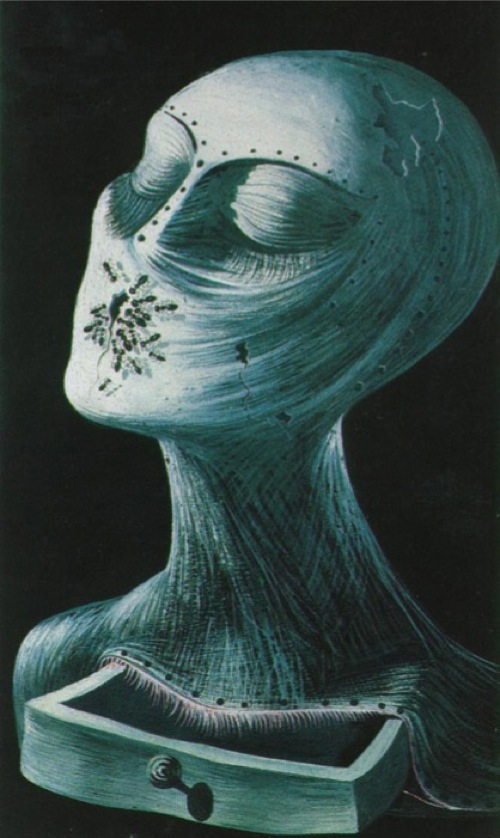